In a spirit of de-mystification, here are some notes on how I came up with the piano parts for the What News album. Most of this may only be of interest to those musicians who like to pick over the bones of other people’s work, but whether you find my playing annoyingly complicated or gallingly simplistic, it should explain something of how it made it onto the album the way it did.

When Alasdair first suggested the idea of working on traditional ballads with piano, I was confused. The last thing I could hear accompanying these epic, repetitive but powerful tales was something with as many Romantic associations as the piano, but I said ‘yes’ immediately, and then started to think about how it might work. I certainly didn’t want to find myself sitting at a Steinway Model D concert grand, which is a totem of several things that rile me about classical music culture: standardisation, the cultural homogenisation that comes with it, the vast expense of acquiring one (over £110k), and the fact that it’s just too bloody loud for most of the music that’s played on it, forcing everyone else, especially singers, to be too bloody loud too. What big Steinways do well, they do very well indeed, but it’s rarely something I really want to take part in.

So decision 1: ‘other’ pianos only. Fortunately, Andrew Baxter had just given the University of Glasgow a beautiful Broadwood grand from 1844. Its serial number is quite close to that of the one Chopin played when he was in Scotland, we have the documentation (thanks to Alastair Laurence) of the boat that carried it to Leith from London, and it still bears the label of Mitchison’s music shop in Buchanan Street, Glasgow, where it was sold. Roy O’Neil restored it, Ronald Brautigam played its inaugural recital, and I’d also been using it for a TV score (Skins Pure). A Broadwood square piano from the same year, also sold by Mitchison’s, came up at auction last year in Glasgow, but it was far too heavy to be gig-able, so I reluctantly had to let it go.

The university also has a wonderful Walter fortepiano by Paul McNulty from 1988: it’s modelled on one of Mozart’s pianos and, besides being an instrument of great subtlety, it can rock like a bastard. So I figured those two should cover it: the Broadwood with its great transparency of sound for the magical textural stuff, and the McNulty for a more direct ‘here’s the song, deal with it’ approach. The dulcitone crept into the picture later. 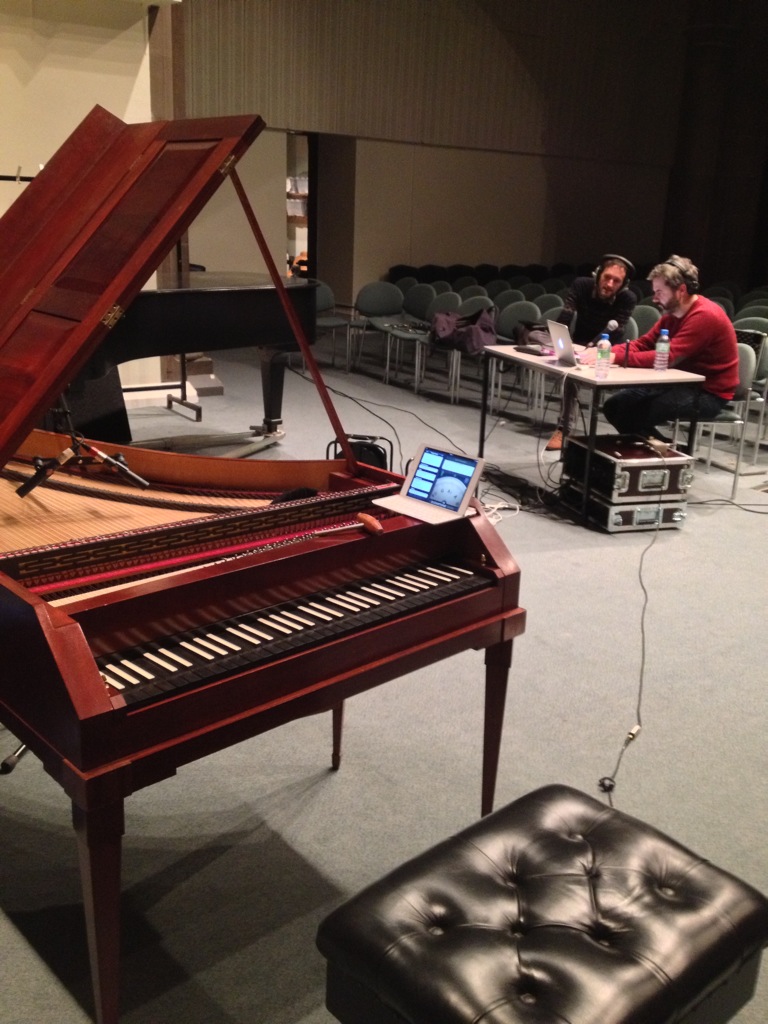 But first I had to learn the songs. Alasdair’s sources are detailed in the album notes, but rather than work from those, I worked from his recorded demos. I listened to these whenever I had some unexpected spare time, transcribing the tunes and summaries of each verse into my tiny music notebook, like a crap Cecil Sharp. This activity took place in number of venues: ones I can remember include the cafe in Maryhill Tesco’s, and a park bench halfway up the hill to Stirling Castle. This park bench was particularly significant, as I was waiting for the 2012 Distil Showcase to start at the Tolbooth, and when it did, one of the featured composers was Amble Skuse, playing her first gig in Scotland. Her piece for Mr McFall’s Chamber included some live processing, controlled by her from a seat in the audience, and I really liked it: it was subtle, she looked like she knew what she’s doing ... and she had a good haircut. As I don’t have enough hair for such things anymore, these things matter. Anyway, Robert McFall introduced us in the bar afterwards and I think I might have mentioned the ballads idea right away, without even asking Alasdair first ...